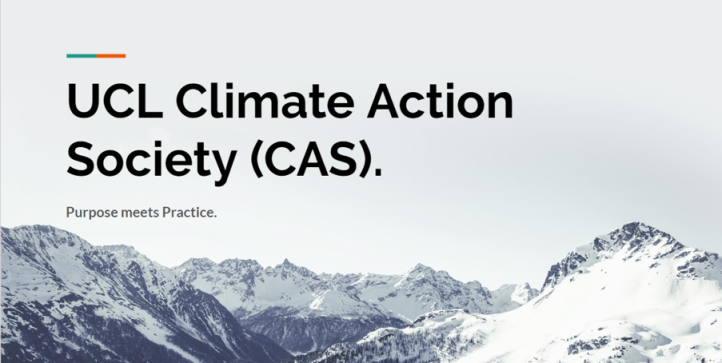 The society purports to bring climate change awareness to all student departments. Talal Osman, second year Chemical Engineering student and Communications Officer at UCL CAS declares: “We are here to make a point. Whether you are on your way to become a political scientist, a financial executive, an engineer, a doctor or a journalist- all are very much relevant to climate action.”

What does UCL CAS mean to its founding members?

Alessia Di Camillo, second year Language and Culture student and Spokesperson at UCL CAS, explains how the society will challenge stereotypes surrounding climate action. She clarifies: “When most people hear the words ‘climate change,’ immediately they can conjure a certain set of ideas- for example being rigidly anti-fossil fuels.

However, given the dynamics of the current global development and industrialisation rates, ‘climate action’ is modernising and evolving- it means to integrate fossil fuels sustainably, rather than to discard them completely.”

Elaborating on this idea, President and Founder Aliza Ayaz writes: “Small misconceptions like these are built into our mind-set, and they allow for pre-conceived ‘nutshell’ ideas that need to be dug open to solve the problem at both local and global levels.

In broader philosophical terms, as humans continue to alter the natural landscape and exploit the plethora of natural resources available to them, they also are morally obligedto make responsible decisions.

The younger generation needs to be exposed to the idea that human desires and resources are constantly changing and that the best approach towards sustainability is to achieve not order, but rather ‘managed chaos’, as we balance the various ethical and economic issues concerning human development.”

The UCL Climate Action Society plans to do exactly that.

How will UCL CAS offer a novel approach to the climate crisis?

The focus of the society is very broad. It is not concentrating on establishing careers within the green economy, nor to develop eco-friendly businesses; it goes beyond these specific concerns.

UCL CAS is where not just UCL students, but the entire UK student community, can work with people from around the country. The society aims to provide a platform for young minds to synthesise the seemingly incongruous ideas brought forward with the aim of solving one of the most pressing problems of the day: climate change.

The UCL Students Union has acknowledged the need for such an arena to cater to the environmental responsibilities that are relevant to global citizenship, and even UCL Provost Michael Arthur praised the society’s purpose. In an innovative new approach, it is in fact not to provide a forum for all UCL students to explore the world of climate action regardless of their academic focus. Rather, the aim is to build on climate action in relation to their coursework.

But what makes the UCL CAS a worthwhile venture?

President Aliza Ayaz elaborates on the question. She muses: “Many people ask us why the society is important. The way I see it, it focuses on general awareness, research, and diplomatic action to prevent a form of progress that happens at the expense of the world and its people.

We have more of a social-constructive side to us: we are concerned about the one billion people who may lose their livelihoods due to the dangerously rising volumetric flow in the rivers of South East Asia that has been triggered by global warming and a more volatile climate.

Our passionate interest in this cause will see us collaborating with like-minded people to make this society a huge success in the fight against climate change. Action begins at a local level, and we want this society to be recognized of the way it can revolutionize young minds and drive people to engage their creative geniuses with climate reality.”

On January 1st, 2016,the 17 Global Goals of the 2030 Agenda for Sustainable Development, adopted by world leaders in September 2015 at an historic UN Summit, officially came into force. Over the next fifteen years,with these new goals that universally apply to all, countries will mobilize efforts to end all forms of poverty, fight inequalities and tackle climate change, while ensuring that no one is left behind.

Goal 13 – ‘take urgent action to combat climate change and its impacts’ – is of utmost importance.

However, until now, no existing UK university level student society has focused specifically on this goal. The impending crises associated with climate change, most notably water shortage, need to be addressed urgently. Therefore, students – the leaders of tomorrow- need to be well equipped with strategies pertaining to its causes, effects and consequences.

What can we expect to see from UCL CAS this year?

The Society’s upcoming flagship event this October will be a ground breaking conference on ‘Sustainable Businesses and Climate Change.’ Over 20 student clubs and 15 national leaders representing science, media, religion, politics, entertainment, education, business, environmentalism, and civil society are expected to come together to develop an action plan to engage British society on climate change.

Their charge will be to diagnose how, in the face of developing science, the population can integrate modern day, sustainable start-up culture with the issue of climate change. More importantly, this UCL Business Society-partnered event will make recommendations about how to incorporate Corporate Social Responsibility while there is still time to affect how climate change unfolds.

Other events in the pipeline include a workshop based around the idea of morality and the climate crisis, ‘Moral Pathways to Alternative Energy Systems and Sustainable Futures;’ and a panel discussion in collaboration with the UCL Environmental Domain and The Grantham Research Instituteentitled ‘Breaking Through to Global Sustainability.’ Stay tuned for more details!

Treasurer of UCL CAS, first year Epidemiology student Rewayda Abdulahireflects on the possibilities for UCL CAS: “With utmost dedication and consistent proactivity amongst committee members, who knows, Leonardo DiCaprio might agree to talk to UCL students one day.

We are working on collaborations and event partners. With diverse, supporting organisations such as the United Nations Association (UK), Green Alliance, the London Chinatown Chinese Association, Selfridges, Uber and KPMG, we hope to make publicise that climate action is not an obsessive cause, rather it is a global responsibility.”

For the application forms and links to the recruitment pack, click here; and for their Facebook page, just here. Membership to the society can be bought through the UCL Student’s Union, for your convenience over here.