Action-Based Campaigns on Campuses: The Strengths

What is a an action-based student campaign? Are they the way forward for meaningful impact?

Students have long been a strong factor in political change and a passionate political force on their campuses. We have seen in recent years that political involvement and activity by young people has increased, most recently with displays of student support for striking staff at universities. We also saw a student-led march through London last year demanding free education, the determined no-platforming of bigots at university events, the decolonisation movement and a coordinated boycott of the National Student Survey (NSS) that, according to the National Union of Students (NUS), led to 16,000 students refusing to take part in the survey and response rates dropping by over 20% at some universities.

Despite being hugely marginalised in political society, young people are able to make their mark on the political climate through organisation, utilisation of social media and sheer force to make their voices heard. Often forced to work outside the mainstream parliamentary political framework, students have to look for other options to make an impact. One option is to challenge their universities directly, where there is usually plenty of room for real positive change to be made.

So what avenues are available to students to challenge university management? An action-based campaign is something that should be considered seriously if it is suitable. These are campaigns for groups who want to get things done. 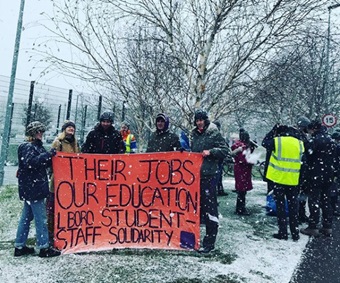 Loughborough students on the picket line during the UCU strike.

In an action-based campaign, the group influences policy decisions beyond meetings and negotiation talks with management. The aim of these campaigns is to put across your campaign message in a way that the university doesn’t approve, operating outside of what they have declared acceptable. You become a nuisance to them until they are forced to react and, hopefully, they back down and decide that it’s easier to give you what you want rather than having to deal with your actions. These actions can be as small or large as you feel necessary.

In Loughborough, a student-led group called Loughborough People & Planet have an ongoing campaign, started this year, to pressure the university to divest from fossil fuel companies. After trying to talk to the university and going through all possible channels but ending in unconstructive results, we began direct action, starting with small displays of protest such as writing messages in chalk on campus and putting up unapproved posters. We slowly escalated these actions as we’ve seen necessary and we have had some success! Loughborough University have agreed to freeze all fossil fuel investments and a working group with management and students has been set up to discuss fully divesting from fossil fuels.

This type of campaign has been successful at other universities too; there are over 60 universities now fossil free and pressure from other People & Planet groups at these universities has contributed to this number. Recent full divestment victories at Cardiff University and King’s College London this year are testimonies to direct action taken by students.

The general idea of direct action is to work outside of the bureaucratic university system. This usually takes the form of sabotaging their property and source of income, disrupting events and shaming them through media, and other examples of how to do this could include occupations, blockades or dropping banners from buildings. If your campaign has a large number of people willing to take action, you could also consider strikes, sit-ins, walk outs, picketing, organised boycotts or mass non-payment.

The recent University and College Union (UCU) strike will be remembered partly for the direct action that students took across the country, with building occupations at nine universities to pressure management to publicly support the strikes. Mass rent-strikes at UCL and University of Sussex have led to bursaries, rent cuts and compensation for overpriced, poor quality student accommodation. Students are taking direct action over issues that affect them and they’re winning.

You can think of the options for challenging your university on a scale of how closely they fall into the bureaucratic system allowed by the university. At one end of the scale, you have voting – if it is something that can be voted on. At the same end of the scale, you can open a dialogue with management to discuss your concerns. Slightly further than that, you could host a demonstration, held at an agreed location or within an agreed route with university security presence, where this is clearly still within the bounds of what is permitted by the university. An action-based campaign is further along the scale, and how much further depends on the actions you take. I would argue that the further along this scale you go, the more likely something will get done.

So when can we justify going beyond what the university has judged as acceptable to get something done? We can only start to answer this question by analysing how universities operate. Universities like to call themselves non-profit or charitable organisations but they accumulate huge amounts of capital, handled by a small group of people, which is then reinvested into the university, after management have taken a cut in the form of their wages, with the aim that it will lead to the accumulation of even larger amounts of capital. This is no different to your typical capitalist CEO of a for-profit company, who after paying themselves then reinvest money to grow their business and make more money.

At Loughborough University, income has increased every year for the last 5 years, from £237.7m in 2011-12 to £300.8m in 2016-17, and expenditure similarly rose from £231.9m to £280.3m in the same timeframe. Money is reinvested on campus buildings and equipment in order to make the university more attractive with the aim of increasing income from tuition fees and grants. Additionally, just as in any large business, there is the organisation of labour to maximise the income of capital with set working hours and senior individuals with the power to fire workers if they want to. They can call themselves non-profit but there is a distinct class character to how a university is ran and, as such, the university management have class interests.

This forceful approach is not one-sided. The university forces its policies upon the world before any campaign is ever started. By the nature of a university, management can use the power they have over students to dismiss any concerns; to shut students out like this is an example of force. More extreme force can take the shape of discipline against students. These are not methods of force that are afforded to students. When you go into a meeting with university management, they will defend their “right” to invest their money however they please or their right to organise their labour however they want or their right to do what they like on their property. You are arguing your right to live in a world that isn’t destroyed by climate change, or whatever your particular campaign may be, and to quote Karl Marx, “Between equal rights, force decides.”

About the Author: Steph Assisi is both a statistician and a runner. She is currently studying at Loughborough University where she has been involved in this year’s fossil fuel divestment campaign.