Let’s face it.  It’s deadline season, so most of us are spending long nights at the library wrapped in blankets, surrounded by empty KFC containers and mainlining caffeine. Even as I write this (my fourth attempt at an article in the last two days), it’s 5 pm on a Monday and I’m in bed blasting the Prince of Egypt soundtrack, making my way through a pack of barbecue-flavoured rice crackers.  Don’t judge me. We could all stand to be a bit happier.

Finland is the happiest country in the world, declared the UN a month ago, and I have to admit when I heard this I was deeply sceptical.

Since I began my exchange semester in Helsinki back in January, I’ve met a lot of Finns, and I can’t say that many of them smile more than necessary.  Finland is an introvert’s heaven – lots of open space, no lengthy conversations at the supermarket, and the determination to avoid sitting next to a stranger on the bus make Finns just the kind of people I like to live near.  They keep to themselves: they don’t especially radiate joy.

This question seems to me to be more about contentment than happiness. Finns may not be the most sunshiny people on the planet, but they do seem to be very content with their circumstances.  Meanwhile, the UK placed nineteenth. Not bad, overall, but we could certainly stand to learn from our neighbours, and those of us just trying to make it to our next deadline could probably use a double boost!

The most significant factor for Finland’s success, according to the study, are GDP per capita and social support, and social democracies typically dominate the top ten spots. But that’s not much use to students with no control over world economics, so we need to think about making changes on a personal scale.

It’s usually the Nordic countries (not Scandinavian, you heathen) in the top spot, and it’s thought that by shaping society, the cold weather has contributed to general happiness.  When Norway took first place in 2017, Professor John Helliwell, an editor of the study, told Time Magazine that “There is a view which suggests that historically communities that lived in harsher weather were brought together by greater mutual support[…] You see this with farming communities as well, who will get together to pull a barn roof up. They don’t ask about who’s paying what. So the colder climate of the Northern [European] countries might actually make social support easier.”

When the Sámi peoples first settled in Finland thousands of years ago, they built their society on the foundation of living in harmony with nature.

Even in modern times, a deep-running love for the outdoors shapes the culture of the land.  Finland is the most sparsely populated country in the EU, with only sixteen people per square kilometre (compared to the UK’s 271), and it pays off. Finland, the so-called ‘Land of a Thousand Lakes’ is actually home to over 168,000, so that water covers 10% of the country.  A further 75% is forestry, and Finns are encouraged to spend their time outdoors. Young children constantly go on school trips out into nature: tiny, reflective vest-wearing people always seem to fill the green space behind my university campus. Finns love the outdoors, and with the myriad national parks so well-looked-after, it’s easy to see why.

The first thing I noticed, within an hour of landing, was the care taken in separating recycling on the domestic level. It’s second nature – everyone does it without thinking. Next, I learned that a small deposit was paid on plastic bottles to encourage customers to recycle in-store.  This policy is coming soon to the UK – if you’re feeling unsure, let me put your mind at ease. The system works perfectly. Finland recycled 94% of its tin cans, 91% of plastic bottles, and 87% of glass bottles in 2017. And if I fill my rucksack with Coke bottles and beer cans over a fortnight and take it to the supermarket with me, I can easily save €5 on my groceries. The system’s been in place for a few years now, and locals don’t seem to think anything of it. It’s good for the planet, so they see no reason to hesitate.

How can we emulate them?

Well, if 2018 is anything to go by so far, anything could happen to the British climate in the coming years. While I was cosily curled up in a more-than-adequately insulated apartment back in February, news reports flooded in of the Beast from the East attacking the UK. My friend scolded me for one-upping her “look at this -6° weather” Instagram story with a sleepy selfie at -18°, and a Finnish classmate cheerfully informed me that the chill was the perfect example of an old saying: “anything that comes from Russia is bad”. Of course, the UK did get an unpleasant time of it, and we’re not anywhere near as well-equipped as the Finns. Besides, we’re British. For better or worse, weather’s kind of our thing. 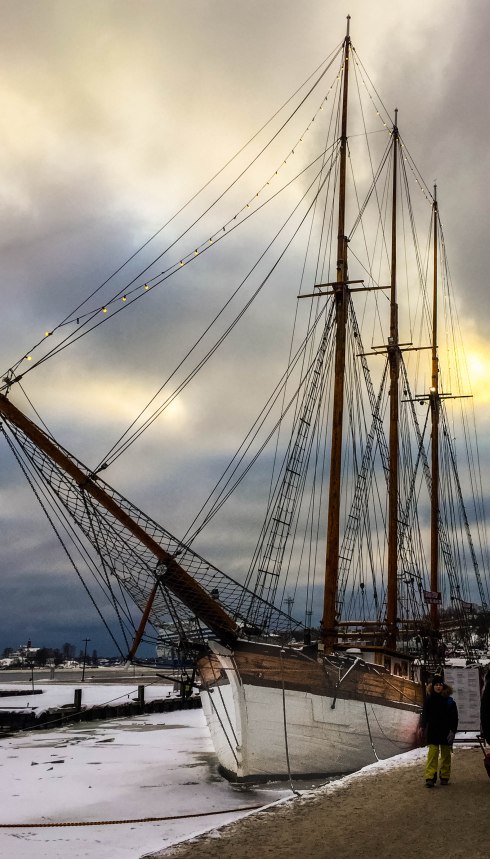 But it’s not the weather itself that does so much good. It’s, as Professor Helliwell put it, mutual support. If you and thirty-seven other people are crammed into one four-bed house, maybe offer out your leftovers, so the remaining half of that pack of reduced chicken breasts that you impulse-bought in Tesco last night doesn’t spend the rest of the year in the freezer and end up in the bin. If the guy who always turns up to your 9 am lecture 45 minutes late with Starbucks likes to throw his cup in the nearest bin instead of the recycling, give him a gentle nudge in the right direction (or, failing that, pull an ultra-sneaky James Bond move and switch the bins). Find out which cafes and shops in your area have sustainable practices and support them. Do what you’ve been putting off all this time and join your union’s environmental society. Love the outdoors, look after the planet, and share the load.

Learn from the happiest countries in the world and stick at it, and you’ll find that it makes you happier, too.

About the Author: Ruth Halliday is a second year Television student at Falmouth University, and is Deputy Editor of WILD Magazine.